skip to main | skip to sidebar
Visit my web site! 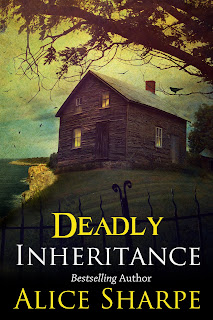 I've dipped my toes into the wonderful world of self publishing, putting up five books in the past few weeks. You can find them on Kindle, Barnes and Noble and Smashwords. So far it's slow going but as we've also just sold out house and are preparing to move, it's not like I've extra time to work on promotion. Still, if you happen to want a quick, fun, and romantic read for a mere $2.99, check them out!

If romantic suspense is more your thing, there are three of those, as well, including one of my favorite books, Deadly Inheritance, the story of a woman who buys herself an old house with a deadly legacy. Happy reading! 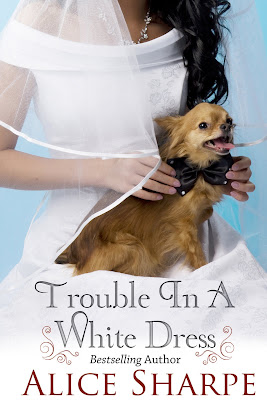 Posted by Alice Sharpe at 2:50 PM No comments: 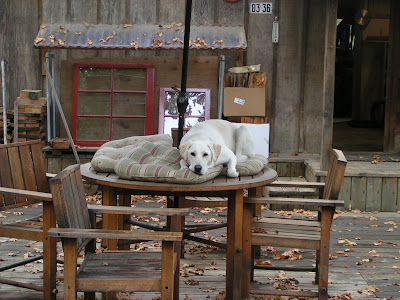 Any of you remember Bonnie, the worst Lab in the world? She took her first camping trip with us this past weekend. The above photo is Bonnie recovering the next day because camping just plum wears a dog like her out. There was much waiting, anticipating, panting, fidgeting, Wookie talk and general annoying behavior and that was just on the drive to the campground where we met with our daughter's family and a bunch of other people. Then she had to cope with two days of leashes, four other dogs all of whom were better behaved than her, and rules, rules rules!

She did manage to get off the leash once. Have you ever seen an old movie where everyone is trying to catch a greased pig? That's what it looked like. The dog took off like a shot, jumped on people, tore through a stranger's camp, avoided all attempts at capture until finally my daughter wrestled her to a stop. Thanks Jen. If you hadn't caught her, we'd probably still be running after her.

She slept well, though. In my bed, no less. And for an animal half my size, she sure takes up a lot of real estate. The bed is now looks as though it's covered with a yellow hair blanket. Bleech.

Not sure Bonnie will ever again get to go camping. Prospects don't look promising. Good thing she loves her babysitter.
Posted by Alice Sharpe at 4:19 PM 1 comment: 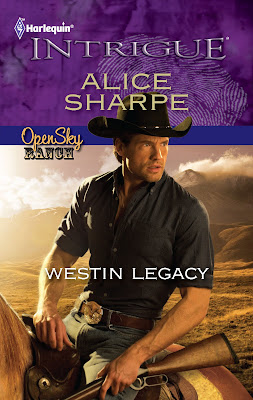 Well, obviously, I'm not real good at keeping this site updated, but I do have grand plans to improve. The cover above is for the second book in the current Wyoming series, release date: October. In WESTIN LEGACY, the youngest brother, Adam, hooks up with a step cousin he hasn't seen since they were both small children to uncover the truth of the disappearance of Adam's mother three decades before.
Posted by Alice Sharpe at 8:09 AM No comments: 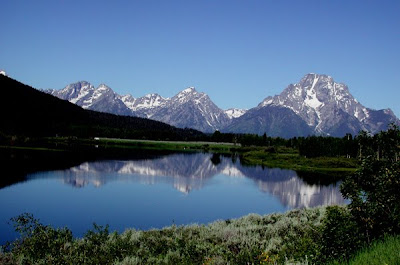 Great news -- the three books set in Montana sold late last week to Harlequin Intrigue.
Wrinkle -- the books are moving from Montana to Wyoming. I'm very excited about this change. The dh and I are heading out to camp our way east until we run into the Rockies -- can't quite imagine placing three books in a state I haven't visited in twenty-five years. That makes me remember going to Yellowstone Park when I was a kid. I wandered off to visit the bathroom and when I came back to our tent, no one was there. I was about seven. Then I heard people calling my name and looked around. My family was lurking a distance away and between me and them was a black bear. Ack!

I stood very still and the bear eventually moseyed away. Exciting stuff, especially when you're a city kid.

Meanwhile, the first book (as yet untitled) will be released next Sept., then the other two will follow in October and November. All three books revolve around three brothers and their ranch set high in the Rockies. There's a princess in danger in the first book -- how fun is that? I've got me some writin' to do!
Posted by Alice Sharpe at 2:06 PM 1 comment: 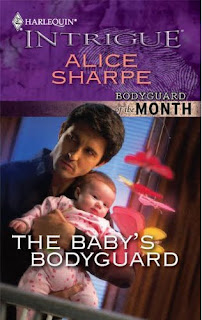 I just found my June cover on Amazon. I love the tension in the man's face as opposed to the baby's innocence. It's also fun that the hero looks much as I envisioned him with the exception of the neatly trimmed hair. All and all, I think it's great. This is the official back copy blurb...

HE WAS SUPPOSED TO BE DEAD...

But Jack Starling was very much alive and looking for answers. His investigation into his crew's ambush leads him to the fling he had a year ago with Hannah Marks. Although Jack is reluctant to believe Hannah had a role in the attack, it is clear she's hiding something, and Jack's suspicions only mount when he meets her daughter.

Determined to unveil her secrets, he vows to stay close. Then Hannah is nearly killed, and Jack must step in-as her baby's bodyguard-while battling his growing desire for the woman who might have betrayed him. 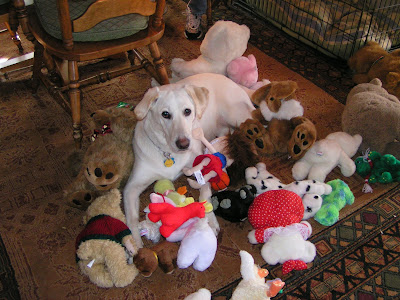 Bonnie got a huge package in the mail today. My dh dragged it into the house and began hacking on the tape. As if she knew her name was on the box, Bonnie chewed on the flaps until it all but exploded open and revealed dozens and dozens of stuffed animals. She immediately began trotting them out (what a treasure!) eventually collapsing in the middle of them. I have never seen a happier dog. Thanks, Jen!!!!

Meanwhile, I'm just back from a Michael Hauge/Bob Mayer two day workshop where I learned tons of stuff, was reminded of even more and have begun implementing it all into my Montana Open Sky Ranch series which is in the proposal stage. I traveled and stayed with my friends, Elisabeth Naughton and Lisa Catto, and had a wonderful time at a lovely hotel on the river in Vancouver. Today I'm happily assimilating all I heard. Great weekend! 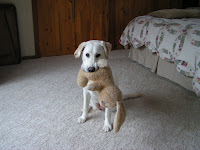 This is Bonnie with a stranglehold on her favorite tug toy, Bunny. As semi-charming as this is, today she outdid herself at the park when she snatched a man's picnic bag and spread bread and drinks everywhere. I was down there walking her -- trying to figure out the plot to the second book which I thought I already had but discovered I didn't -- when she came across this poor guy minding his own business. A second later, she'd stolen his sack and taken off for the hills, ignoring me as I chased her alternately threatening her and cajoling, promising her treats and bludgeoning in equal measure. When she finally tired of the chase, she smiled at me -- okay, more like grinned -- and then ran off after a stick and I reclaimed what was left of the man's belongings.

On a good note, I did figure out what I need to do in book two, so maybe all that running and swearing was good for my brain cells? Who knows?
Posted by Alice Sharpe at 5:26 PM 4 comments: